EU paper and pulp firms and other 'bioeconomy' sectors not likely to be in the top tier of post-2020 free EU ETS handouts are urging EU lawmakers not to adopt a tiered approach proposed by the UK and France.

EU paper and pulp firms and other ‘bioeconomy’ sectors not likely to be in the top tier of post-2020 free EU ETS handouts are urging EU lawmakers not to adopt a tiered approach proposed by the UK and France.

The European Bioeconomy Alliance, representing processes based on using renewable plant and animal resources to produce food, fuels and other materials, said it would distort markets and undermine efforts to develop renewable materials meant to replace fossil fuel-based products.

In an emailed note, they argued tiering would mean fossil fuel-based producers getting 100% free allocation, whereas bioeconomy sectors reducing fossil fuel dependence would get less, thus clashing with the aims of the European Commission’s bioeconomy strategy.

The UK and France argue that a tiered approach such as that outlined in their non-paper would allocate a limited share of free EUAs to those sectors most at risk of carbon leakage and help prevent an across-the-board slashing of allocations to all via the Cross Sectoral Correction Factor.

The tiered approach has found favour among many lawmakers in an early stage of considering the Commission’s post-2020 ETS revision proposal, though EU Climate Commissioner Miguel Arias Canete has warned that it would be complex to administer.

The highlighted table below outlines the share of free allocation bioeconomy sectors would stand to receive under various tiered approaches, with starches, oils and fats, and sugar producers all getting as little as 9% of their requirement. 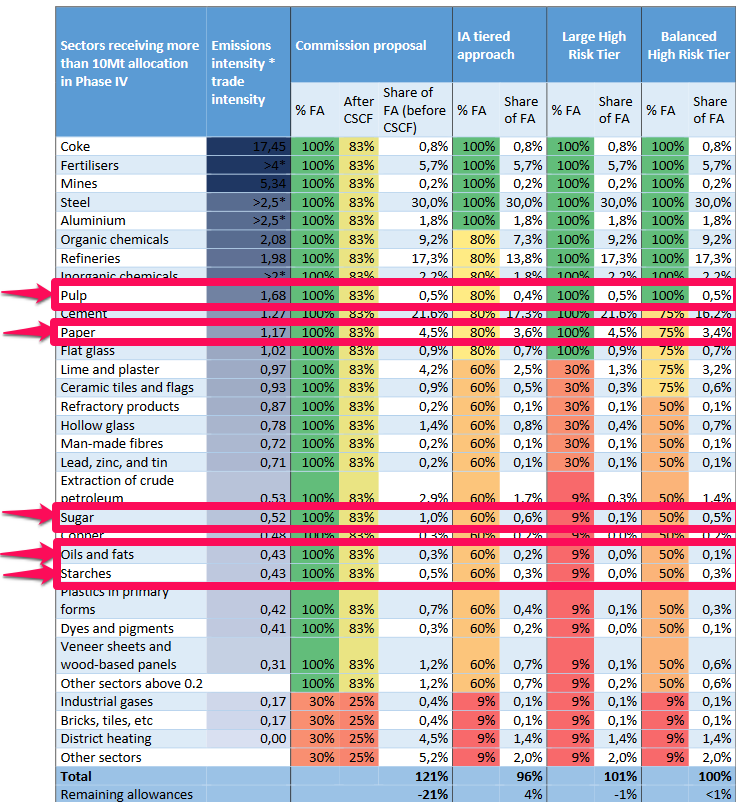