The European Parliament on Tuesday approved rules to require ship owners using EU ports to measure, report and verify their annual GHG emissions from Jan. 2018, with more voices calling for the move to be a “stepping stone” to eventual CO2 targets for the industry. 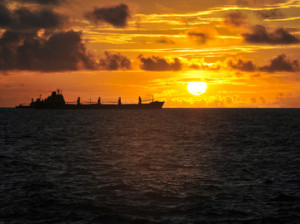 The European Parliament on Tuesday approved rules to require ship owners using EU ports to measure, report and verify their annual GHG emissions from Jan. 2018, with more voices calling for the move to be a “stepping stone” to eventual CO2 targets for the industry.

The law establishes an EU-wide MRV system for shipping emissions with a view to improving information about ship efficiency and emissions from the sector, while encouraging reductions in CO2 output and fuel consumption.

“(It) is expected to produce a virtuous circle of increased transparency, increased competition and greater fuel efficiency. But this is where our cheering stops,” said Sotiris Raptis, clean shipping officer at Brussels-based sustainability campaigners Transport & Environment.

“Given that the sector’s rapid growth is set to outstrip efficiency gains, only CO2 targets under the EU’s 2030 plan and Energy Union can deliver actual emissions cuts.”

The international shipping industry, which has so far largely skirted regulation over its contribution to climate change, accounts for 3-4% of worldwide greenhouse gas output, but that share is expected to rise as much as five-fold by 2050, according to the International Maritime Organization.

“If these emissions were reported as a country, maritime transport would be Europe’s eighth largest emitter. According to the latest IMO study on GHG emissions from ships, under a business-as-usual scenario, shipping could represent 10% of global GHG emissions by 2050,” T&E said.

This has led to increased calls for global curbs on the sector ahead of UN climate talks later this year.

The Marshall Islands, the economy of which largely relies on shipping but whose existence is threatened by rising sea levels, has made a submission to the IMO’s Marine Environmental Protection Committee, which will meet on May 11-15 to discuss climate issues.

T&E said this meeting will provide an opportunity for EU governments to back the Marshall Islands’ submission and push for a global CO2 target for the industry.

“When the holders of the world’s third largest shipping registry can see the existential threat posed by rising shipping emissions, it’s time for European nations to step up to the plate and support definitive action at the IMO,” Raptis added.

Under the EU law, the European Commission will biannually assess the sector’s overall impact on the global climate, and must review the regulation should a wider, international agreement be agreed by the IMO.

Prior to Tuesday’s legislation, ship operators were encouraged but not obligated to submit efficiency data to the Clean Shipping Index.
The parliament also agreed to cap the use of land-based biofuels in transport.

The decision will limit at 7% the use of these “first-generation” biofuels that can count toward the EU’s 10% renewable energy target for transport by 2020.

“With this limit, Europe will prevent emissions of up to 320 million tonnes of CO2, which would otherwise have been caused by extra bad biofuels needed to meet the 10% target. The emissions avoided equal to Poland’s total carbon emissions in 2012,” T&E said.