Americas > US announces plan to curb emissions from agriculture

US announces plan to curb emissions from agriculture

The US on Thursday announced a voluntary programme to help its farmers, ranchers and foresters cut greenhouse gas emissions by more than 120 million tonnes of CO2e per year, or around 2% of the country’s annual output. 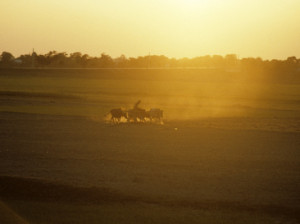 The US on Thursday announced a voluntary programme to help its farmers, ranchers and foresters cut greenhouse gas emissions by more than 120 million tonnes of CO2e per year, or around 2% of the country’s annual output.

The incentive-based initiative will also help increase soil sequestration and expand renewable energy production in the agriculture and forestry. According to estimates, those two sectors estimated 516 million tonnes of CO2e in 2013, or around 9% of the national total.

“American farmers and ranchers are leaders when it comes to reducing carbon emissions and improving efficiency in their operations. That’s why U.S. agricultural emissions are lower than the global average,” said Secretary of Agriculture Tom Vilsack.

The initiative does not require approval from lawmakers as the US Department of Agriculture will use clauses in the 2014 Farm Bill to provide technical assistance to farmers, ranchers, and forest land owners and incentivise them with grants, low-interest loans and other technical assistance.

The plan’s framework consists of ten “building blocks” that span a range of technologies and practices to reduce GHGs, increase carbon storage and generate renewable energy.

The programme also hopes to increase liquid renewable fuels and to up the use of biomass to meet heating and power needs.

It will contribute to meeting President Obama’s goal to cut US greenhouse gas emissions by 26-28% below 2005 levels by 2025.

In a recent analysis, the U.S. Chamber of Commerce found that the country’s existing abatement programmes, including the Clean Power Plan, will fall some 330 million tonnes short of meeting this goal.

However, experts estimate that this agriculture sector plan will help cut that gap by a third by 2025.

A group of researchers recently found that while the share of global GHGs emitted by agriculture, forestry and other land use (AFOLU) has fallen in the past 25 years, agricultural emissions are growing as the other two areas decline.