Carbon intensity among the Group of 20 major economies declined in 2014 at its steepest rate since 2000, an early sign that the world is beginning to decouple GDP from emissions, an analysis by consultancy PwC found.

Carbon intensity among the Group of 20 major economies declined in 2014 at its steepest rate since 2000, an early sign that the world is beginning to decouple GDP from emissions, an analysis by consultancy PwC found.

“What we are seeing is the first signs of the decoupling of growth from carbon. The trend in Chinese emissions looks like it’s starting to turn, and renewables are on the up. But we’re not there yet. And the Paris pledges don’t get us there either. The real tipping point is when renewables hit cost parity with fossil fuels,” said Leo Johnson, PwC sustainability and climate change partner in a statement.

Despite the improvement, the countries have failed to reach the 6.3% requirement to achieve 2C in all seven years PwC has carried out the study. 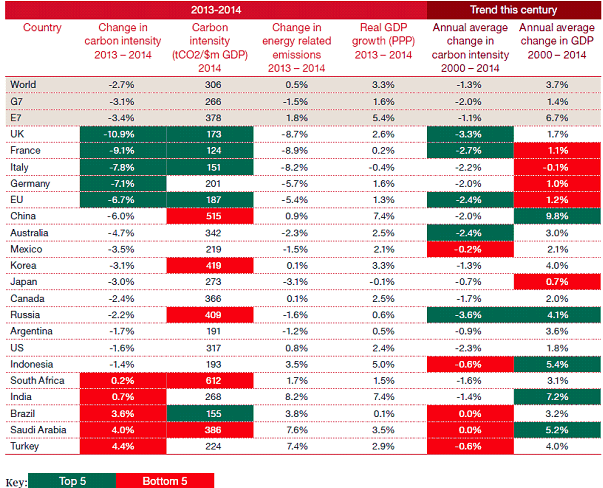