The survey, the second of its kind, mapped expectations about China’s carbon market and climate policy among 304 respondents within government, industry, consultancies and academia.

Price expectations for 2017, the likely debut year for the national market, varied between 25-50 yuan, with industry expecting higher prices than government officials and academic observers. 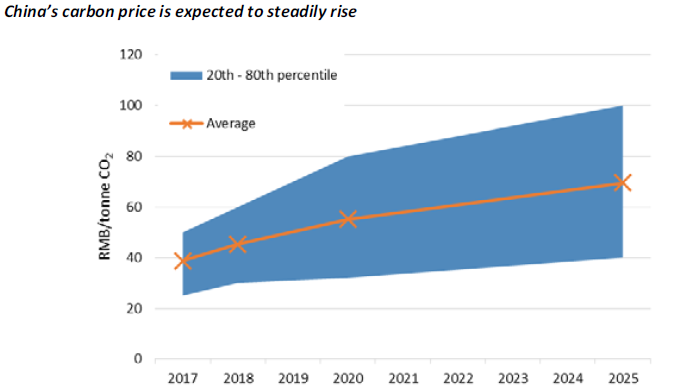 If the survey respondents are correct, Chinese carbon allowances would trade somewhat below current EU prices (€8), but above RGGI levels ($6). The price would be in the higher range of where allowances are trading in China’s seven pilot schemes.

All groups of respondents expected the government to tighten allocation over time, pushing the price up to 56 yuan in 2020 and 70 yuan in 2025.

As many as 82% said they thought the national ETS would have a moderate or strong impact on investment decisions by 2020.

The survey revealed the huge degree of confusion as to how and when China will roll outs its national ETS.

The NDRC has said the national market will begin with a limited amount of sectors from 2017, but has yet to give details of how the transformation from regional pilot markets to a countrywide scheme will take place.

In the China Carbon Forum survey, 41% of respondents said they expected more pilot markets to be launched in addition to the existing ones, with affluent coastal provinces like Fujian, Jiangsu, Liaoning, Shandong and Zhejiang seen as the most likely.

Only a third of those surveyed expected the government to set up a single, unified market from 2017, while a quarter thought China would just carry on with the existing pilots for the rest of the decade.

Most respondents thought – as signalled by the NDRC – that the national market would only be fully rolled out by 2020.

The survey also showed that fewer observers think China’s market will link to other carbon trading schemes than in the previous poll.

Conducted in 2013, it found that as many as 70% expected the Chinese market to link to the EU ETS by 2025. However, in the new survey, more than half did not think China would link to any other country’s market until 2030 at the earliest.

“There has been an increasing recognition that international linking between schemes is complex,” the report said.

The survey also revealed deep discontent with the seven pilot markets, as only 1% of respondents said they were well designed.

The markets have struggled with over-allocation, price volatility, low liquidity and a near complete lack of transparency, since the first pilots were launched in 2013.

“The major problem continues to be the lack of public information – information which is not publicly available is used for trading by privileged players,” one of the survey respondents commented.

Some 22% of respondents said allocation methodology and cap levels needed improvement. A fifth said both MRV regulations and accreditation and verification routines were lacking, while another 15% pointed out issues with the registries and market oversight.

Nevertheless, the survey showed observers expect prices in all seven pilots to rise in 2015 and 2016. Beijing is expected to remain the most expensive market at above 50 yuan.

Price expectations were lowest in the Chongqing market, but with allowances prices thought to surpass 30 yuan, that would still represent more than a doubling of the current price of 13.50 yuan.

– All non-governmental respondents named government regulation and intervention as the biggest factor deciding price levels in the market (ranging from 41-51% in the various groups). However, not a single government official thought government decisions would impact the price. Instead, 73% of officials said economic growth rate would be the main price driving factor.

– 83% thought China would introduce a carbon tax at some stage, and more than half of those thought it would happen by 2020 or sooner. The average expectation among those who thought a tax would be introduced was 23 yuan in 2016, rising to 50 yuan in 2025.

– Two-thirds thought government and industry would be unprepared for a national market in 2016. However, confident was much higher in regions that host pilot schemes.

– 82% thought China’s national emissions target would be intensity-based in 2025, but by 2030, 61% anticipated China would have switched to an absolute target.

– Two-thirds thought China’s overall GHG emissions would peak at some time in the 2020s, in line with Beijing’s UN pledge. But 19% thought the peak would come later, while 14% predicted it would happen pre-2020.