Americas > Australia, Canada challenged by other nations over climate plans

Australia, Canada challenged by other nations over climate plans

Nations have through UN submissions directed tough questions at Australia and Canada about their climate change plans, challenging both countries over their level of ambition and the policies put in place to meet existing emissions targets. 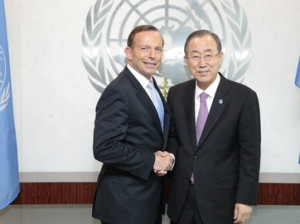 Nations have through UN submissions directed tough questions at Australia and Canada about their climate change plans, challenging both countries over their level of ambition and the policies put in place to meet existing emissions targets.

The questions were raised under the UN’s international assessment and review procedure, where nations assess the climate plans of developed countries.

Questions were asked of most countries – though notably the UN has not published any queries over the US climate plans – but the most critical ones were reserved for Australia and Canada, whose current governments have an international reputation of doing little to cut greenhouse gas emissions.

Both are amongst the few developed nations to have missed the Mar. 31 deadline to release their INDCs for Paris, but they are expected submit their plans around mid-year.

Many of the questions directed at Australia focused on its Emissions Reductions Fund (ERF), Prime Minister Tony Abbott’s initiative to replace the country’s carbon tax and emissions trading scheme.

Australia’s previous government had published figures showing how many tonnes of emission reductions it expected to achieve through the ETS, and had pledged to use CERs to meet the shortfall to its 2020 target.

But the current government has not released any estimates on what it expects the ERF to deliver, other than saying it is “confident” the 2020 target of cutting emissions to 5% below 2005 levels will be met. It has also ruled out the use of international offsets.

“What is the expected mitigation potential of this fund? Will it be enough to compensate for what was included in ETS and CFI (Carbon Farming Initiative)?”, asked China in its submission to the UN.

The EU asked how the ERF could contribute to meeting Australia’s more ambitious but conditional targets of a 15% or 25% cut, which Australia has said it will pursue if other big-emitting countries step up their efforts.

The Australian government has indicated its target will remain at 5%, declining to strengthen its goal following the release of more ambitious plans by China and the US, the world’s biggest emitters.

“Without a credible target and effective domestic policies to achieve it, our major allies and trading partners will continue to heap on the pressure. They are taking action and they will want us to pull our weight too,” John Connor, CEO of the Climate Institute in Melbourne, said in a statement.

International scrutiny was also aimed at Canada, whose latest GHG inventory released on Friday showed emissions grew by 1.5% in 2013 to 726 million tonnes of CO2e.

Canada’s emissions have dropped 3% since 2005, but stand 18% above 1990 levels. The current government under Prime Minister Stephen Harper has said it aims to cut emissions to 17% below 2005 levels by 2020, but it is not on track to meeting the target.

Sweden pointed out that Canada’s own projections for 2030 emissions assume that no new government policies will be introduced to reign in carbon from Canada’s oil sands extraction.

Canada was also criticised for lack of transparency in documents it has submitted to the UN, with several countries, including China, asking for more information and data on issues such as LULUCF.

Both Australia and Canada were also asked to clarify whether they would use international carbon offsets to meet their 2020 targets, as was Japan.

Japan has indicated it would use its Joint Crediting Mechanism to meet part of its target, but has not specified how many credits it expects to generate from its scheme, which it introduced to replace its reliance on the UN’s Clean Development Mechanism.

The UK in particular was critical of the JCM, asking Japan to clarify how it will ensure it will avoid double-counting and how the JCM can be guaranteed impartiality and independence from the Japanese government, which is developing JCM projects in poorer countries in exchange for half the offsets from each installation.

When Japan announced the target in December 2013 it was framed as an “interim target”, but Japan has not indicated since that it is contemplating changing it.

“Has the interim target for 2020 meanwhile been adopted as firm target or has it been changed? If this did not yet occur when do you expect to adopt a firm target?,” the EU asked.

The UK, along with Germany, was in turn quizzed by Australia and China about how it intends to ensure national 2020 emission targets will not result in lesser efforts across the rest of the EU.

Both countries have policies and goals higher than the overall EU 2020 target, around half of which is regulated under the centralised ETS cap with most of the rest part of a burden-sharing agreement that potentially allows laggard nations to buy emission reductions from those exceeding their goals.

The UN has set a window from Apr. 1 to May 28 for each country to provide detailed replies to all questions asked.