Even as ministers ink the EU’s contribution to a global climate deal on Friday, the bloc's officials plan to continue awarding European industry emissions permits worth hundreds of millions of euros annually because the Paris pact will be too weak to protect them from foreign rivals not subject to comparable carbon pricing.

Even as ministers ink the EU’s contribution to a global climate deal on Friday, the bloc’s officials plan to continue awarding European industry emissions permits worth hundreds of millions of euros annually because the Paris pact will be too weak to protect them from foreign rivals not subject to comparable carbon pricing.

All 28 EU environment ministers are in Brussels to finalise the bloc’s INDC, its contribution towards the global UN deal due to be struck in December in Paris.

Every major emitting country is also expected to submit an INDC outlining its emission-cutting plans from 2020 as part of a collective aim to keep global warming within 2C limits.

But the prospect of all countries taking action is not enough to convince EU policymakers to auction all allowances under the ETS, which would further incentivise companies to invest in cleaner technologies.

“We don’t live in a perfect world,” said Peter Zapfel, an official at the European Commission’s climate department on the sidelines of the Argus European Emissions Markets conference in Amsterdam this week.

At the event, he told representatives from some of the EU’s biggest emitting companies that they can expect to continue getting free carbon allowances, albeit a smaller share than currently, as the annual emissions cap decreases in the EU ETS.

“It’s what we have always done in the past and what leaders have decided to continue in the future … this free allocation will surely give rise to a lot of debate,” he said.

Last October, EU leaders agreed the bloc will set a 2030 target to cut greenhouse gas emissions by 40% under 1990 levels, without reducing the share of carbon allowances to be auctioned under the EU ETS.

But they agreed that “free allocation will not expire” and said the so-called carbon leakage protection measures will continue “as long as no comparable efforts are undertaken in other major economies.”

“Comparability of efforts is a tough nut to crack” said Sam Van den plas of environmental campaigners WWF, who admitted that it seemed inevitable that free allocations will continue post-2020, even with a Paris deal.

The European Commission is expected to kick-off in June the lengthy process of setting rules for how the free allocations will continue post-2020.

“It’s really important for the rules to be able to anticipate some of the changes that will inevitably come up in other major economies up to 2030, rather than being set in stone,” Van den plas added. 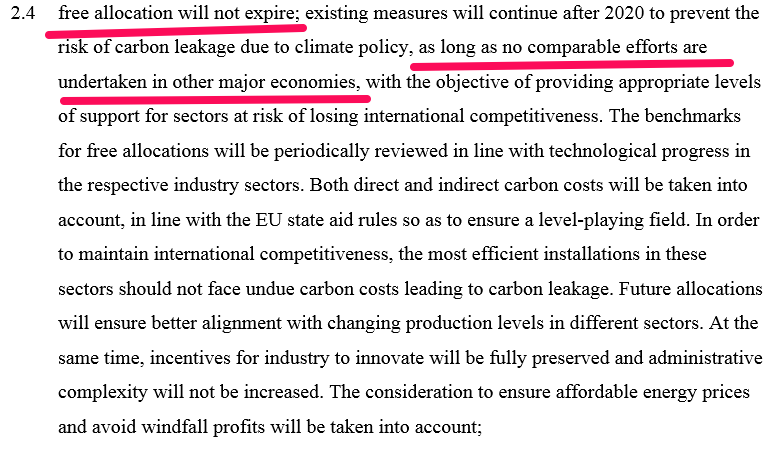 In principle, many EU companies also want a more flexible allocation system from the current one that determines the allocation up to 2020 based on factories’ production levels in 2007.

“We need a continuation of free allocation until we have this global level playing field,” said Martin Casey of cement producer Cemex.

Russel Mills of Dow Chemical, whose global operations use the equivalent of around 800,000 barrels of oil a day, said the Paris deal was unlikely to produce that level playing field of carbon costs.

“There is a big difference between an agreement and then other countries having a significant policy cost. At the moment, there are huge differences and this is likely to persist until at least 2030,” he said.

He said the current system of free allocation in the EU ETS was encouraging other nations to impose carbon-cutting policies.

Over 60 countries and sub-national jurisdictions are already putting a price on carbon.

“It actually encourages global progress because it demonstrates that you can act when others don’t. It may sound perverse but it does actually speed things up.”

The Paris deal will probably be too weak in itself to bring an end to free allocation, but it could be followed up by a stronger UN agreement later for the EU to impose restrictions on imported goods, suggested Andrei Marcu of the Centre for European Policy Studies.

“Probably by the mid- to late-2020s some kind of other international agreement will need to be reached, perhaps there is a need for border adjustments because free allocations just won’t cut it anymore for the EU to reach its goal of -85% emission reductions by 2050,” he said.

Current EU law allows the executive to consider such border measures, for example carbon tariffs, but the Commission has been reluctant to examine them, fearing it could anger major trading partners.