ART/TREES and CORSIA must urgently restrict the use of HFLD credits to safeguard environmental integrity, argue several consultants critical of decisions by both bodies to enable HFLD credits to be used to offset fossil fuel emissions.

ART/TREES[1] and CORSIA[2] must urgently restrict the use of HFLD credits to safeguard environmental integrity.

Earlier this month, Guyana became the first country to achieve issuance of ART/TREES credits, and to sell credits to a corporate buyer. One-third of Guyana’s credits will be purchased by Hess Corporation. This is a fundraising success for a country that is home to over 18 million hectares of forest (an area about twice the size of Portugal) but that has been unable to receive appropriate compensation for forest conservation efforts under traditional carbon market standards. Traditionally, carbon credits issued for REDD+ efforts represent reduced carbon emissions, that are estimated by comparing actual emissions against a historical reference level. Given that historical emissions in high-forest, low-deforestation (HFLD) countries like Guyana are already very low, there is limited opportunity to further reduce emissions and therefore little opportunity to generate carbon credits to finance conservation of forests. By allowing HFLD jurisdictions to earn credits through an “HFLD adjustment”, ART/TREES allocates additional carbon credits to HFLD countries that go beyond their historical deforestation reference levels.

HFLD credits aim to overcome the barriers to accessing carbon market finance for forest conservation that countries with low historical deforestation face. With the HFLD adjustment, ART/TREES aims to support the conservation of the world’s forests beyond and above reducing emissions from deforestation. ART/TREES allows qualifying HFLD countries to annually claim 0.05% of their entire forest carbon stock multiplied by an HFLD Score calculated based on current forest cover percentage and deforestation rate. What sounds like a small adjustment results in millions of credits that can, among others purposes, be used as offsets for aviation emissions under CORSIA.

Some 84% of the 33.5 mln jurisdictional ART/TREES credits issued for Guyana resulted from this HFLD adjustment. This is evidenced by Guyana’s TREES Registration Document and TREES Monitoring Report published on the ART Registry: Guyana reported a total of 33.5 mln tonnes CO2 emission reductions (after deductions for uncertainty and non-permanence buffer withholding) compared to its crediting level for the period 2016-2020. Without the HFLD adjustment for carbon stocks and baseline carbon removals (which represent 28.2 mln tCO2e), emission reductions would have totalled 5.3 mln over the same period, based solely on avoided emissions for forests under more imminent threat. Guyana’s actual emissions from deforestation and forest degradation, historical average emission crediting level, and HFLD adjusted crediting level are illustrated in Figure 1. It is worth pointing out that actual emissions in 2019 exceeded the historical average emission level, resulting in a net increase in emissions, but Guyana did achieve real and additional overall emission reductions of 5.3 mln tonnes between 2016 and 2020.

While only a small portion of the issued credits represent real and additional emission reductions, all of Guyana’s issued ART/TREES credits can be used to offset emissions. This confirms the concerns raised by us in a Carbon Pulse comment in April that the ART/TREES HFLD methodology has the potential to seriously undermine carbon markets if HFLD credits are used to offset fossil fuel emissions. In the case of Guyana, the issuance of its HFLD credits was quickly followed by the announcement of a joint agreement between the Government of Guyana and Hess Corporation to purchase a total of 37.5 mln HFLD credits from current and future issuances, for a total of $750 mln at $20/tCO2. The agreement represents important financing for Guyana’s Low Carbon Development Strategy and a powerful incentive to enhance conservation and further reduce deforestation. However, Hess—a global oil and gas company with oil exploration concessions in Guyana—claims that the credits are “permanent and additional” and “an important part of Hess’ commitment to support global efforts to address climate change and for the company to achieve net zero greenhouse gas emissions by 2050”.

HFLD credits should not be used as offsets under CORSIA or to meet net zero targets. We fully agree with ART/TREES that countries should be incentivised to invest in the long-term conservation of their forests. The ART/TREES Board, in a response to our earlier commentary, clarifies that the ART/TREES HFLD methodology seeks to provide opportunities for countries without high levels of emissions to participate in carbon markets by allowing ongoing conservation efforts to be adequately incentivised. We strongly support corporates paying for forest conservation and agree that HFLD countries need to be rewarded for ongoing conservation efforts. However, we remain concerned about the use of non-additional HFLD credits that represent non-additional climate benefits to offset emissions and make carbon neutrality claims.

A hypothetical example with increasing emission levels between 2021 and 2025 helps to further illustrate the HFLD carbon market challenge. According to current HFLD procedures under ART/TREES, a progressive percentage deduction must be applied to the HFLD adjustment if actual emissions exceed the historical average emission level. The deduction applies once forestry emissions increase by 15% or more. No HFLD credit may be issued if actual emissions exceed historical average levels by more than 75%. While the deduction procedures seem to be addressing the potential problem of generating credits even while forestry emissions increase, the corresponding reductions in HFLD credits may be too little too late. Figure 2 illustrates a case under which emissions from deforestation and forest degradation increase by 20% compared to historical average emissions between 2011 and 2015. In this example, a country would be able to issue a total of 8.5 mln credits over five years (green bars), despite a 15% deduction in HFLD credits, and even though deforestation and degradation result in additional gross emissions of 15.7 mln tonnes CO2 over the same period (yellow bars above the dotted line). In this scenario, buyers of ART/TREES HFLD credits offset their emission with carbon credits from a country where emissions are in fact increasing rather than being reduced. This means that offset credits are being issued while conservation efforts are failing. 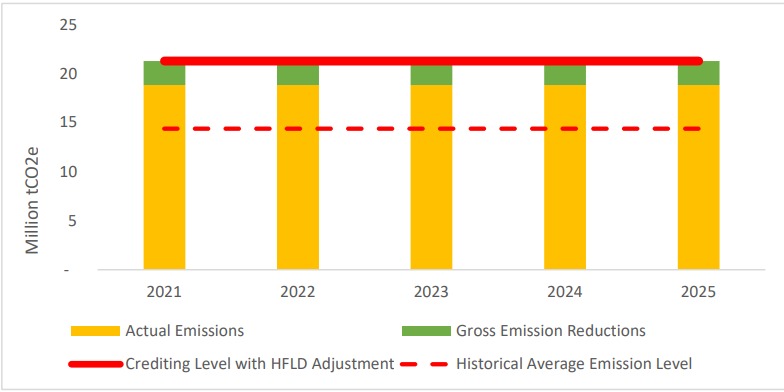 If HFLD credits are used to offset emissions, they should properly reflect the carbon removal flows created by existing carbon stocks and represent only the portion of those carbon removals that is demonstrably additional. ART/TREES credits issued for HFLD countries represent a small amount of real and additional reduced emissions (5.3 mln credits in the case of Guyana) and a relatively larger HFLD adjustment (28.2 mln credits in Guyana). Reduced emissions, if conservatively measured, could be used to offset. HFLD adjustment credits should not be as offsets because the methodology to quantify them is not robust and they are not demonstrably additional. In its current form, the ART/TREES HFLD methodology does not distinguish between HFLD credits representing emission reductions and those that come with the HFLD adjustment. This means that buyers cannot distinguish “offset-grade” credits from “conservation-reward” credits. Since all ART/TREES HFLD credits can be used to compensate emissions in the aviation sector or to achieve voluntary carbon neutrality claims, these credits risk undermining overall climate mitigation efforts. This also seriously limits the potential contribution of carbon markets to global climate change mitigation and jeopardises the integrity of forest carbon markets.

However, with appropriate safeguards and standard-adjustments, ART/TREES HFLD credits could be used as a basis for making results-based payments or non-offsetting claims. Payments for HFLD credits could be used to reward countries under bi- or multilateral cooperation programmes or be purchased by corporates to achieve broader climate goals. If appropriate use restrictions were adopted by standards like ART/TREES and offsetting schemes like CORSIA, environmental integrity would be safeguarded without compromising the option for HFLD countries to receive recognition and incentives for forest conservation efforts.

Any opinions published in this commentary reflect the views of the author(s) and not of Carbon Pulse.