The new 20-page working text, trimmed down from 83 pages previously by Algeria’s Ahmed Djoghlaf and the USA’s Daniel Reifsnyder, contained two main elements – a draft core agreement for the December climate summit and a draft decision to thrash out further details before the agreement enters into force in 2020.

Gone was the section of unallocated items that contributed to bloating the size of the previous draft.

Most options for carbon markets had been kept in that final section, and Monday’s heavily-bracketed draft contained few references to or mentions of an international emissions market in the core agreement.

But it did say countries may “cooperate in the implementation of mitigation activities”, potentially paving the way for international carbon trade.

In the draft decision portion, it said countries should agree by next year’s UN climate conference rules and guidance for accounting of emission reductions, including allowing use of “internationally transferred mitigation outcomes” to meet national goals “supplemental to domestic action”, a basic principle for international carbon trade.

Also in the draft decision, the diplomats included two key choices, one for countries to establish a mechanism at next year’s UN conference to transfer emission cuts between parties that would build on the CDM, or, a second option to have no such mechanism. 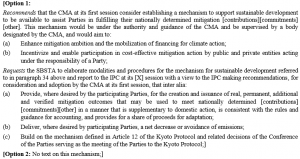 Of the nearly 150 INDCs submitted so far, at least 70 countries have said they intend to use or explore the use of market-based mechanisms to help meet targets or raise funds for mitigation activities for the post-2020 period, although that number contains a great many more sellers than buyers.

Such plans may face years of uncertainty if there is no language or provisions for international carbon trading in the Paris agreement, but with the growing number of national and sub-national governments turning to CO2 markets, observers are confident emissions trading will remain a key approach to reducing GHG emissions.

“We know there are going to be cross-border transfers, the agreement is not going to stop it,” Dirk Forrister, head of the International Emissions Trading Association, told Carbon Pulse on Friday.

But he said the credibility of the market would benefit from being part of the international climate regime.

“It will help trust and confidence in the system if principles are set out within the agreement and detailed decision,” Forrister said.

IETA is calling for a unified crediting mechanism to be established by 2017 to assist countries in achieving their INDCs, creating a fungible unit that can be used worldwide.

Forrister said that if there was no clear process for this at the December conference, interested countries were likely to advance and create their own rules outside of the UN.

“If not in Paris, my suspicion is that we will have a group of countries doing this somewhere else.

Negotiators could still force issues such as carbon markets back into the main text ahead of the final Paris deal, though given the range of other issues under discussion it is unlikely that substantial additions could be made.

The draft agreement released Monday proposed that parties should submit INDCs with renewed emission targets every five years, although it left it open whether those targets should be referred to as contributions or commitments.

The text also included provisions that would scale up annual climate finance after 2020, although it was left in brackets whether the Paris deal should contain a reference to the $100 billion by 2020 in finance that parties pledged in Copenhagen.

The new text will be subject to a week of negotiations in Bonn later this month, the last meeting before thousands of delegates and observers descend on the French capital in late November.