Conversations > COMMENT: Same old August for EU carbon prices… or is it?

COMMENT: Same old August for EU carbon prices… or is it?

European carbon prices have followed their now-traditional course in August by rising on the back of the 50% reduction in auction volumes. This has happened every year since 2008 – with one exception – and is pretty much baked in to trading strategy, writes Alessandro Vitelli.

European carbon prices have followed their now-traditional course in August by rising on the back of the 50% reduction in auction volumes. This has happened every year since 2008 – with one exception – and is pretty much baked in to trading strategy. 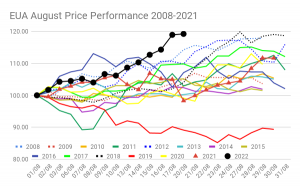 So far this month’s rally has eclipsed any previous August we’ve seen before, with prices now up by 25% from where they began it in less than three weeks. Nobody’s wholly surprised by the increase, but there are some that shake their heads and point out that there’s no fundamental reason for it.

For a start, the market remains well-supplied overall. With industrial output beginning to drop due to high energy costs, there’s some headroom beginning to appear in demand for EUAs. There’s even talk of some industrials selling EUAs back into the market.

Sure, the gradual switch back to coal-fired generation boosts demand again, but we’ve been seeing this for months, and utilities will have been hedging that for some time already. It’s not like they suddenly started in August.

But then energy prices have really shifted into high gear this month. Cal-23 German power and front-month TTF natural gas have both jumped more than 50% just this month.

So is it more than just the psychology of a 50% cut in auction volumes? The chart above suggests that the month of August is something you can write into your calendar every year, confident that there’s a 93.3% chance that if you buy on July 31 you’ll make an average 11% return by August 31.

A quick look at the commitment of traders report suggests the same:

Investment funds cut their long positions in EUAs to a low of 22 million tonnes in the week ending July 29 – that’s the lowest total long position for this segment of the market in more than two years. In the two subsequent weeks, their total length grew by nearly 70% to more than 37 million tonnes, during which time EUAs rose by 12%.

No other category of participant grew their length by anything like that amount in the same period.

And of course this is before we consider algo trading and other short-term participants who are said to maintain a flat book by the end of each day and so don’t crop up in exchange data. There are plenty of people who’d point the finger at pure short-term speculation, the “pump and dump” merchants who live for volatile markets like this.

Let’s go back to utility hedging. By my calculations, the cal-23 clean dark spread has just about doubled in the month of August, from €188/MWh to €360/MWh. So it stands to reason that any coal-fired plant will be running as hard as it can.

Data from the Fraunhofer Institute supports this: German coal- and lignite- fired power generation has increased by 15% in the year to date, while gas-fired power has fallen by nearly 24%. So there should be plenty of coal capacity that needs hedging.

But it’s worth keeping an eye on the month-by-month evolution in this data. Gas-fired generation dropped very sharply in the first few months of this year: 25% down in January, 50% lower in February, -29% March and -33% in April.

BUT… it started to recover thereafter. May gas generation was 44% higher than a year earlier, June was up by just 5% year-on-year and July by 21%.

So gas generation isn’t dead. The clean spark spread shows that a 38% thermally efficient gas plant in Germany can still make a profit of nearly €50/MWh selling power for next year. Granted, it’s not the €360/MWh clean dark spread, but it’s still an operating profit.

As Germany’s effort to refill its gas storages has already passed its September target, it may not be out of the question to see gas generation posting more year-on-year increases. Sure, coal is the main feature, but gas is still there.

And as some participants point out, with the energy complex in the state it is right now, it might not be useful to expect market-rational behaviour. Utilities may well run whatever plants they can simply to capture prompt electricity prices that are in excess of €500/MWh.

And since we’re on the subject of irrational behaviour, it’s worth also pointing out that for some time already EUAs haven’t been able to do the job they were created to do.

The price of carbon is nowhere near high enough to force any fuel switching from coal back to gas. That’s logical, given what’s going on around us. The EUA price could be €50, or it could be €150, but coal would still be more profitable than gas.

Of course, it’s possible that EUA prices are high enough to persuade an industrial manufacturer to reduce emissions, but the problem is gas and power prices are already more than high enough to do that, and carbon isn’t getting a look in.

Industrial emitters are suffering more from high energy costs than they are from high carbon costs – though EUAs are not cheap either! – and decisions by the likes of Nyrstar and Slovalko to suspend production are both an echo of what we saw last October when natural gas prices first started to spike, and a taste of what may come this autumn if there’s no relief.

Here’s a chart that shows how much energy and carbon has risen by over the last two years, indexed to Jan 4, 2021:

On the surface it’s hard to see how politicians can point to carbon as the root problem that’s causing so much trouble for industrial and residential consumers. “We have to cut the cost of carbon!”, they’re saying, “because energy is so expensive!”

We’ve had proposals to set a price cap on carbon, a price corridor, and we even have our favourite Polish politicians calling for the EU ETS to be suspended.

Gas, coal and power are all cross-border markets; the first two are properly global in nature. Prices for natural gas in Japan (through the JKM market) and in the US (Henry Hub) impact the price of TTF gas in Europe and vice versa. Even a European politician is going to recognise that they can’t regulate the Henry Hub or JKM markets and so can’t really influence what we have to pay to bring gas to Europe.

If we don’t want to pay the high price of LNG, then hey, it can just as easily go to someone who is willing to pay. So regulation is a non-starter in global energy markets.

Luckily for the politicos, there is an entire home-grown market that feeds into the cost of energy that they *can* influence: the EU ETS. “Great!”, they think. “We can cap the cost of carbon and look like we’re doing something about this energy crisis.”

To be clear, carbon adds a small proportion to the cost of already very expensive electricity, and industrials have to pay for EUAs when they burn gas in their various processes.

One analyst I spoke to estimated that the increase in carbon prices over the last year represents around €31 of the roughly €500 increase in power prices.

But don’t be fooled into thinking that scrapping or capping EUAs will have any impact on what you and I pay to heat our homes with gas. The EU ETS doesn’t impact domestic heating bills, unless you heat and cook with that already-expensive electricity.

So what we have here is the EU ETS playing the role of (mostly) innocent bystander being threatened by a lynch mob. Any action to limit the impact of carbon prices will only impact maybe a half of consumers’ energy bills.

And let’s not go into the irony of Europe switching from gas back to carbon-intensive coal in order to keep the lights on. It’s a sad reality and one that is also making the anti-nuclear lobby think hard.

And what comes next?

On the surface, September brings with it a resumption of full auction volumes, something that one might expect to be a bearish driver. The standard fortnightly total volume will drop to 21.89 million EUAs between September and December, compared to 22.25 million between January and July; that decline could be a bullish driver.

The end of the holiday season will swing the focus back on Europe’s industrial economy, and traders will be listening and watching for news from the region’s heavy industry. We’ve already heard about a few big emitters intending to suspend production, and there may well be more if energy prices keep spiralling higher.

Industrial demand destruction might start to be felt right away if companies that typically buy EUAs all year round suddenly stop. But there are those companies that usually wait until March to buy any outstanding compliance volumes, so we wouldn’t see their impact until Q1 next year.

And what of power generation demand? The summer seems to have seen emissions on a steep trajectory as coal – and gas – were drafted in to replace lost nuclear and hydro generation. Rising river temperatures mean reactors have to be turned down, while low rainfall over the spring and summer leave reservoirs at low levels and unable to generate as much.

And let’s not forget Brussels. We have the “Fit for 55” package trilogue to come and it seems likely that the worsening energy crisis is going to impact how the negotiations between the Council, Commission, and Parliament progress.

More interesting still is the looking spectre of the RePowerEU plan. The Commission proposes to sell €20 billion worth of EUAs from the Market Stability Reserve to help fund the Russian energy transition (oh, and the clean transition too).

These regulatory bends in the road seem to have been forgotten as the market has scrambled on board the Great Summer Rally. But €20 billion, at current prices, is more than 200 million EUAs. Not even a 100% switch back to coal and full industrial production would absorb that.

It’s looking like we’re going to have to have a few more windows open on our browsers this autumn. And maybe a paper bag in case the market triggers hyperventilation.

Alessandro Vitelli is an independent journalist who works for Carbon Pulse on a part-time basis.  The views expressed are his own. This article appeared first on his personal website carbonreporter.com