The GCF board will next month decide whether to make its first funding awards of up to $168 million after the secretariat put forward eight mitigation and adaptation projects on Friday, none of which were CDM schemes.

The GCF board will next month decide whether to make its first funding awards of up to $168 million after the secretariat put forward eight mitigation and adaptation projects on Friday, none of which were CDM schemes.

The projects cover a range of activities with three submitted via a more local direct access process and five via multilateral agencies, the GCF said in a statement alongside the board meeting’s draft agenda.

Also on the board’s agenda is the GCF’s acute staffing shortage, which the fund blames on the lack of willingness of candidates to move to its headquarters in Songdo, South Korea, and unattractive salaries, a separate statement said. The board meets over Nov. 2-5 in Livingstone, Zambia.

Just one project – an energy efficiency programme across several Latin American nations – was for mitigation only, the rest were either adaptation or both.

The projects were drawn from 37 shortlisted that are seeking $1.5 billion in total, 29 of those were from public sector bodies.

With huge demand from the developing world to fund mitigation and adaptation activities, the GCF said in June that just a fraction of the 120 project applications worth $6 billion it had received by then “looked promising”.

The GCF has around half of $10.2 billion pledged by mainly developed nations in its coffers and plans to prioritise projects that are not adequately supported by existing climate finance mechanisms, in particular for cities, land management and the resilience of small island states.

Though the fund is required to split 50-50 its cash between adaptation and mitigation, observers expect carbon-cutting CDM projects and Programmes of Activities (PoAs) to apply and receive at least a small share of the money.

Two of the selected projects were developed by or ultimately involve the private sector: 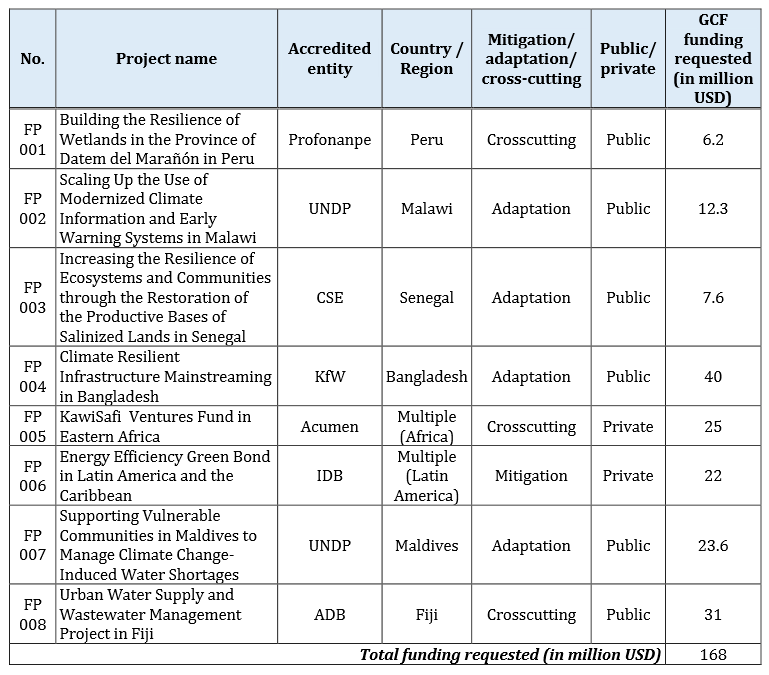 List of funding proposals submitted for consideration by the GCF Board. Source: GCF