Traders are bracing for EUAs to fall further despite a price collapse that has wiped out a year's worth of gains in just over a week, losses that many have blamed on big speculative short-sellers pouncing while carbon was vulnerable.

Traders are bracing for EUAs to fall further despite a price collapse that has wiped out a year’s worth of gains in just over a week, losses that many have blamed on big speculative short-sellers pouncing while carbon was vulnerable.

The 15% drop to near €7 over the first seven trading days of 2015 has left many traders and analysts scratching their heads and scrambling to revise their projections after a becalmed year of relatively steady incremental gains.

Carbon Pulse has spoken to more than a dozen market participants in the past week to get a sense of why prices plummeted and what’s next once they stabilise. 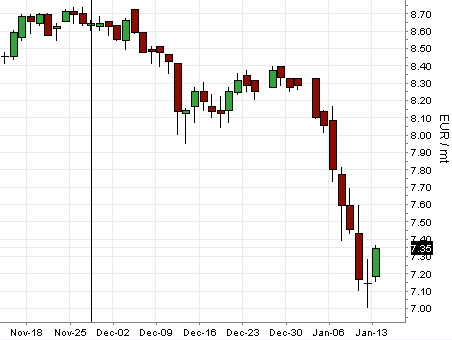 Many traders and analysts entered 2016 with a positive outlook, pointing to continued auction curbs from the EU’s Backloading programme, more supply tightening on the way in 2019 under the MSR, and the launch of European lawmaker efforts to lock-in further curbs beyond 2020.

But while there was no definitive bearish news to start the year, some claim there were a few signals that carbon prices were susceptible to a fall.

A number of market participants suspect that the decline was first triggered by a wave of profit-taking based on these signs and following the hefty gains booked over the past few months, which came against a backdrop of sliding global commodity prices.

The drop in EUAs, they said, was then precipitated by a second wave of short-selling from traders keen to test the market’s limits, and exacerbated by some utilities unwinding positions due to low power prices and a few under-pressure industrials unloading allowances to raise cash.

“Most of this looks like massive speculative selling,” said one broker, comparing it to the huge bearish bets said to be partly responsible for a similar sharp decline in crude oil prices and other commodities.

Exactly who has been selling carbon is difficult to surmise because the vast majority of trades have been done anonymously via ICE’s screen-based contracts.

“We’ve had no clients selling,” the broker added. “We’re seeing only buyside interest, and other brokers I’ve spoken to are seeing the same.”

“Some group of traders pushed down the market. For me there’s still a big question mark over how in the world we could fall €1 in one week with no bad news behind it,” another trader added.

While there was none of the usual policy hiccups that have driven carbon collapses in recent years, market participants said there were several key elements in place that combined to batter EUA prices:

1) Utilities on the sidelines

European utilities, traditionally the largest buyers of EUAs, have reportedly been unwilling to step in to defend prices, sitting mute as German baseload power prices hit record lows below €25/MWh, denting profit margins, and after a record warm December left them with millions of unused carbon allowances.

This even put some utilities on the sellside to unwind forward hedges they will no longer need, several traders said.

“A power price under €25/MWh is not the time to be bold. Spreads may have held up, but even lignite producers with fixed costs would be asking themselves some really big questions,” a third trader said.

The existential threat to some coal generators comes as other plants, particularly in more liberal markets such as the UK, are being crowded out of forward markets by cheaper and cleaner gas, cutting EUA demand.

“The relative competitiveness of gas against coal in power has been improving,” said analyst Trevor Sikorski of Energy Aspects in a weekly report published on Tuesday.

Carbon’s crash began in a thin post-holiday market and a rare week free of government auctions.

In fact, EUA sales had been on hold for the past three weeks due to the holiday period, which, while drastically curbing supply, also meant utilities took a break from hedging.

However, the resumption of auctions this week not only opened the supply taps again, but the flow, now at an average of just under 15 million EUAs/week, is some 2.3 million units-per-week higher than last year due to fewer allowances being withheld under Backloading.

Buying interest in the sales has also been underwhelming, as reflected in low oversubscription rates in the first two auctions of the year, compared to January averages in the past two years.

EU carbon loomed large in short-sellers’ crosshairs after becoming one of the few bullish bright spots in 2015, a year in which Brent crude fell by over 35%, European coal prices tumbled to their lowest levels in more than 10 years, and power prices in many European countries plummeted to all-time lows.

EU carbon rose by more than 10% in 2015, making it one of the world’s best performing commodities, but its days were seemingly numbered.

“Carbon’s finally getting caught up in the global commodity sell-off, and it’s being exacerbated by selling by industrials that are in real trouble,” said another trader on Monday.

Falling commodity prices and fears of another global economic slowdown are hitting EU industries hard. This is visible in the share prices and credit derivative swap (CDS) spreads of the continent’s major manufacturers, including ArcelorMittal.

The industrial sector holds a fat but dwindling EUA surplus, and while many are holding on to inventories in anticipation of being short allowances over the next decade, some are looking to monetise the units to raise cash as their share prices tumble and amid fears of increased Chinese competition.

Many European firms are concerned that Chinese producers will increasingly target foreign markets with their basic materials and other industrial products, especially if the country is granted market economy status by the EU and World Trade Organization.

Why carbon may fall further

Despite the huge losses in carbon, some traders see more downside in store for EUAs before they’re able to mount a recovery.

“I reckon we can bounce hard up once we’ve found a bottom, but it looks like [speculators] still want to break €7 before that,” said a fifth trader.

Market watchers cited the rise in open interest on ICE’s benchmark Dec-16 EUA futures contract as an indication of a build-up in short positions since the end of last year.

Open interest was at 559.6 million on Monday, up 5 million from Dec. 31, the most recent ICE data showed on Tuesday.

Several traders postulated that once prices start to climb again, it may trigger more short-covering and stop-losses, creating a domino effect that sends prices soaring back towards the technically- and psychologically-key €7.50 and €8 levels.