Dozens of poorer nations seeking to sell emission reductions to help decarbonise their economies are likely to face disappointment because barely any rich countries are willing to outsource their abatement efforts through buying carbon credits.

Dozens of poorer nations seeking to sell emission reductions to help decarbonise their economies are likely to face disappointment because barely any rich countries are willing to outsource their abatement efforts through buying carbon credits.

Some 146 countries covering 87% of global emissions, including some of the world’s poorest nations, had submitted their INDCs by the UN’s soft Oct. 1 deadline for national contributions to a post-2020 global climate pact due to be signed in Paris in December.

There are at least 70 countries that are seeking to use, or considering using, market-based mechanisms, according to INDC data compiled by Carbon Pulse.

But the vast majority of those are developing nations looking to sell emission reductions to richer governments, with barely a handful of willing buyer countries and no interest from the major economies of China, the EU and US.

“The seller countries would be disappointed, and as the INDCs are the result of hard-won national compromises they are not subject to negotiation in Paris,” said Frank Melum, an climate policy analyst at Thomson Reuters Point Carbon.

Keen sellers include some of the world’s poorest nations including Ethiopia, Rwanda, Haiti and Cambodia. Many of these countries have sought for a decade to sell emission reductions via the UN’s CDM, which channelled $350 billion to carbon-cutting projects in the developing world. However, the vast majority were built in advanced economies such as Brazil, India and China.

These countries are now setting emission goals, but, along with most richer nations, are focused firmly at abatement within their own borders.

The remaining buyer nations are relatively small emitters with limited demand, such as Canada, Japan, New Zealand and Switzerland. It is unclear whether market proponents Mexico and South Korea would be buyers or sellers.

Brazil’s INDC said it would be willing to participate in a global carbon market via a UN-led crediting mechanism, but President Dilma Rousseff said her nation would probably still be a seller.

She told journalists at the UN’s General Assembly this week that Brazil would probably help supply carbon markets with emission reduction credits should nations install a global or smaller programme, Bloomberg reported.

There could be at least 2 billion tonnes of CO2 market demand over 2021-2030, initial calculations suggest, equivalent to less than half of a percent of global emissions over the decade. 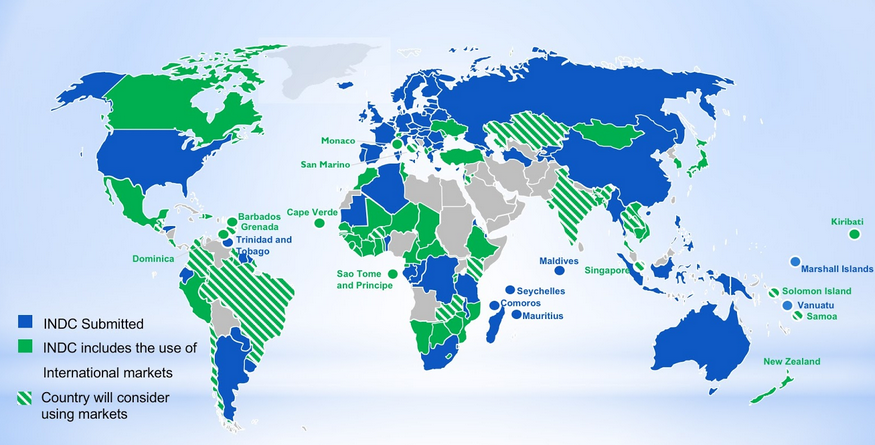 Market use in INDCs. Source: IETA

For Dirk Forrister, head of pro-markets business association IETA, a greater willingness among countries to facilitate emission trade could drive down the cost of cutting emissions and encourage them to go further.

“The lack of overall ambition and market linkage are directly related,” he said.

“You see in a number of INDCs – for instance Ethiopia and Morocco – a basic amount they could do on their own, but to do more they say they need access to climate finance and carbon markets.”

Many are focusing instead on whether developed countries will keep their promise to provide $100 billion a year in overall climate finance to poorer nations, he told journalists at a briefing in London last month.

As a result, the prospect of a burgeoning transnational carbon market or a resurgence of a global crediting mechanism such as the CDM seems slim in the near-term, but a Paris deal could set a course for more trade in future, observers say.

“Seller countries should be most focused on getting rules in the Paris agreement to make sure markets can be used and push for a review mechanism that would allow demand to emerge through increased ambition,” said Thomson Reuters’ Melum.

“Even if the US and EU don’t end up using international credits, they clearly expect provisions for them to be included in the agreement,” he added.

IETA’s Forrister said that the EU and US should push for clear UN rules for transferring emission units internationally because they would eventually need them.

“If they are trying to achieve 2050 goals to cut their emissions 80% or more, they are going to need to co-operate. We are going to be looking at storage opportunities for CCS and forests,” he said, referring to the prospect of crediting emissions buried underground or growing trees to soak up CO2.