European carbon prices have risen markedly so far this year, but up until recently UK-based emitters may not have felt it.

European carbon prices have risen markedly so far this year, but up until recently UK-based emitters may not have felt it.

Front-year EU Allowances futures prices trading on ICE Futures Europe are up by more than 12% in euro terms so far this year, trading near €8.30 on Tuesday.

But a strong pound has more than halved that increase for utilities and industrials with British-based operations.

In fact, it’s only in the past month that the Dec-15 EUA in GBP terms has crossed into positive territory in relation to end-2014 prices.

A fortnight ago, the benchmark EUA contract was up by 10.4% in euro terms for the year to date, but only 0.8% higher in pound sterling.

The trend carries mixed blessings for UK emitters, as it should benefit utilities that must buy the euro-denominated carbon units against their forward power sales, while annoying any industrials looking to raise some cash by selling their spare permits.

“UK utilities are generally very disciplined when it comes to hedging, they typically lock in power, fuel and carbon all at the same time, so this development is unlikely to materially change their buying patterns,” said Louis Redshaw, head of London-based Redshaw Advisors.

“However, UK industrials come to market less frequently and will have been under less pressure to think about carbon price rises in recent months.”

The pound has appreciated by 6.5% against the euro so far in 2015, due in part to concerns over the debt-riddled Greek economy, rock-bottom eurozone interest rates and the EU central bank’s quantitative easing programme, as well as a comparatively strong British economy.

But the euro has gained against its major counterparts in the past few days as speculators, amid a steep fall in global equity markets, buy the currency back after having used it to fund carry trades.

That has reduced the gap between the year-to-date gains recorded by the Dec-15 EUA in EUR and GBP terms to 6.9 percentage points from 10.4 a week ago.

“The ever-strengthening EUA price coupled with GBP strength that has peaked has caused the GBP carbon price to jump up and out of its sideways price trend,” Redshaw said, warning that some UK-based industrial manufacturers that are short allowances could be caught off guard.

“This will focus those industrials’ attention on their own buying requirements, which should lead to some increased demand for EUAs in September,” he added.

Below is a chart of year-to-date Dec-15 EUA prices in both EUR and GBP terms (using same-day spot exchange rates): 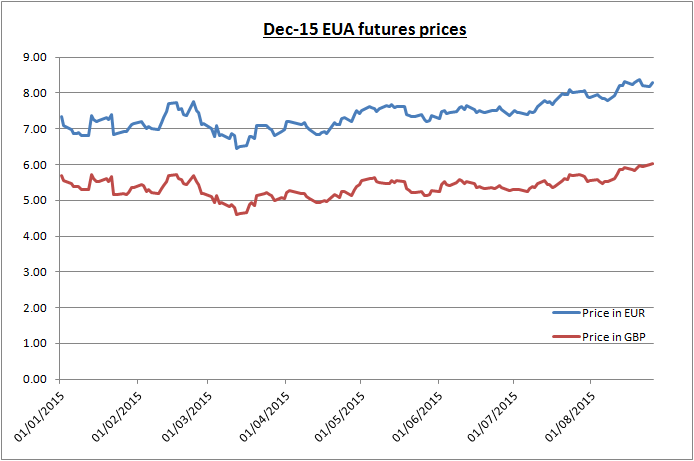