EU carbon prices climbed 2.7% this week in the face of bumper auction supply but further gains were capped by firm technical resistance.

EU carbon prices climbed 2.7% this week in the face of bumper auction supply but further gains were capped by firm technical resistance.

The Dec-15 EUAs closed up 10 cents on Friday at the week’s top trade of €7.64 on ICE to lodge a 20-cent week-on-week rise.  The benchmark carbon contract has bumped against this level for three straight days.

The Dec-15s are consolidating in a ‘pennant’ technical formation (see chart below), with the upper band aligned with the upper resistance seen in recent weeks.

Pennants are formed during periods of consolidation, and typically end when prices emphatically break out either to the upside or the downside.

Busting out and closing above the pennant suggests the contract could next test May’s high of €7.75.

However, analysts said failure to breach the ceiling could indicate that buying is facing exhaustion ahead of the market’s summer quiet period, and that could send prices back down towards the 23.6% and 38.2% Fibonacci retracement levels around €7.40 and €7.19 respectively.

The middle and lower Bollinger Band lines are also near those respective levels, potentially amplifying their technical significance.

The bellwether contract’s Relative Strength Index (RSI) was pegged at just above 59 on Friday – well into bullish territory but well shy of the 70 level that indicates an instrument is overbought. 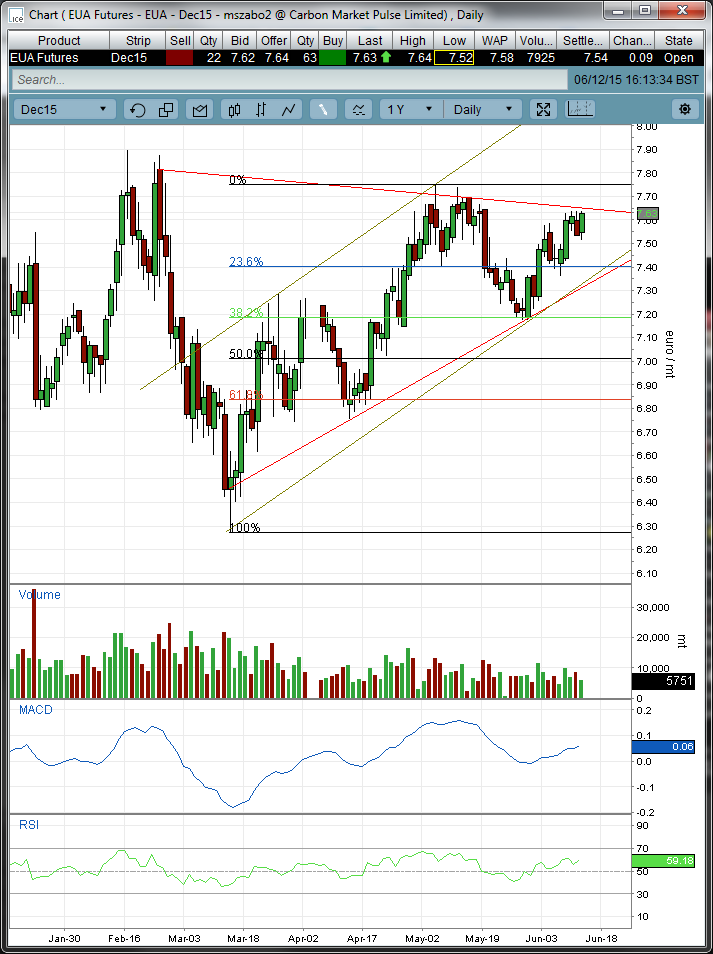 Last week saw a modest 1% rise in the Dec-15 price amid auction supply of 9 million.

However, this week’s increase has come despite the market absorbing 15 million EUAs from government sales, a near-maximum level for this year.

Auction sales ease somewhat to just under 12 million next week, but then rise again to 15 million the following week.

Meanwhile, next-year and Calendar 2017 German dark spreads were steady on Friday while the Cal-18s slipped on weaker power prices.

Coal-fired power profit margins for 2017 and 2018 dropped by at least 10% each this week due to more expensive coal and carbon coupled with cheaper electricity.