EU carbon prices have spiked by as much as 25% in the past week and are up a massive 40% from a month ago, but traders warned that while the recent rally seems to have been largely fuelled by big gains in wider energy prices, it has become detached from underlying fundamentals.

EU carbon prices have spiked by as much as 25% in the past week and are up a massive 40% from a month ago, but traders warned that while the recent rally seems to have been largely fuelled by big gains in wider energy prices, it has become detached from underlying fundamentals.

Front-year EUAs trading on ICE hit an intraday peak and three-and-a-half-month high of €7.07 on Wednesday, surging for a second day on heavy volumes and volatile trade.  Prices rose 13% on Tuesday, marking the largest daily gain in more than three years.

“The main strength behind carbon has come from power, but it’s all speculators at these levels with little compliance buying, as I don’t see many utilities out there now,” one trader told Carbon Pulse.

“We are so overbought that [the latest rise] doesn’t mean much.  There are some very aggressive specs pushing the market around, meaning we could go to €7.50 or we could go back to €6 just as quickly.”

The Dec-16 contract’s RSI indicator topped 80 on Wednesday, the highest level recorded since 2014 and well above the 70-level that can indicate prices are overheating.

Graph the benchmark EUA contract since the end of 2015 and it’s starting to look like a ‘U’ shape (see below chart), with prices crashing from €8.29 on Dec. 31 to a two-year nadir of €4.62 six weeks later.  This was followed by a month or so of consolidation mostly between €4.75-€5.25 before the current rally, which is seeing prices rise at a similarly frantic rate as they fell.

Observers have attributed the bulk of these wild fluctuations to speculators, saying there is little else in the way of changes to the underlying fundamentals to warrant such large moves.

“We’ve had a big rise in a short space of time on very thin news,” a second trader said, rebuffing claims from some onlookers that this week’s gains were linked to a French proposal to implement a unilateral carbon floor price or news that an MEP from the European Parliament’s industry committee may push for steeper post-2020 ETS cap cuts.

“Nobody can give fundamental view on why [EUAs] should be here … There have been no fundamental changes, to the market’s underlying supply and demand dynamics, to the MSR, to wider policy, so in light of this the price could be anywhere,” the second trader added.

“We could see €5.00 or we could see €8.50, both levels we’ve visited in the past six months, as it’s not possible to come up with a cohesive argument as to where prices should be in this range.”

A third trader added: “Although I am bullish in the long term, I am not going to touch this market for a week or two. It’s very tempting but the volatility is just crazy.”

A comfortable majority of the market participants Carbon Pulse has spoken to said the latest EUA gains were led by short-covering, a view supported by the sizeable drop in open interest seen on the bellwether ICE Dec-16 contract amid the latest price rise.

They also pointed to similar moves in other energy prices.

“A lot of people were short power, and gas and coal as well.  In fact, if you did anything but short energy over the past six months you probably would have lost money,” the second trader said.

Cal-17 German baseload power prices are up by around 25% from their record lows below €21/MWh hit in mid-February, gains said to be linked to rising fuel costs and concerns over utility profitability.

“Utilities are changing their hedging programmes, deciding that they don’t have to run their plants at these prices.  They’re telling governments ‘if you can keep the lights on at €20/MWh go ahead, because we can’t’, and banks and funds have recognised this and are riding power back up,” the second trader added.

Meanwhile, coal for Rotterdam delivery next year has followed a similar path, while UK Winter 2016 gas is up around 20% in the past week.

Several traders also linked these gains to the partial recovery in oil prices. Front-month Brent crude is up a massive $20/barrel or around 75% from its mid-January lows.

They also noted a pick-up in carbon buying by utilities that were taking advantage of meatier clean dark spreads, which in Germany this week hit their highest since early February.

“This positive wave that has hit commodity markets has also pushed up carbon … but such a big jump doesn’t feel natural [and] I’m expecting to see a huge correction,” the third trader said.

Other market players echoed this view, questioning whether carbon would be able to hold near current levels, especially in light of the bearish fundamental picture painted by analysts last quarter in their attempts to explain the EUA price collapse.

The experts pointed to lower demand from utilities changing their hedging patterns, forecasts of gas prices falling relative to coal due to increased LNG imports, and higher EUA auction volumes coming in the next few years due to the end of Backloading.

If all realised, these factors would combine to inflate the current supply surplus weighing on the EU ETS, and thus exert more downward pressure on EUA prices that have not seen double digits since 2011.

“There’s still too much carbon out there, so you need to trade this market technically as fundamental trading doesn’t have much value at the moment,” the second trader said.

“Who’s going to eat up this excess supply over the next two years, at prices of €7?  You’d need some pretty deep pockets.” 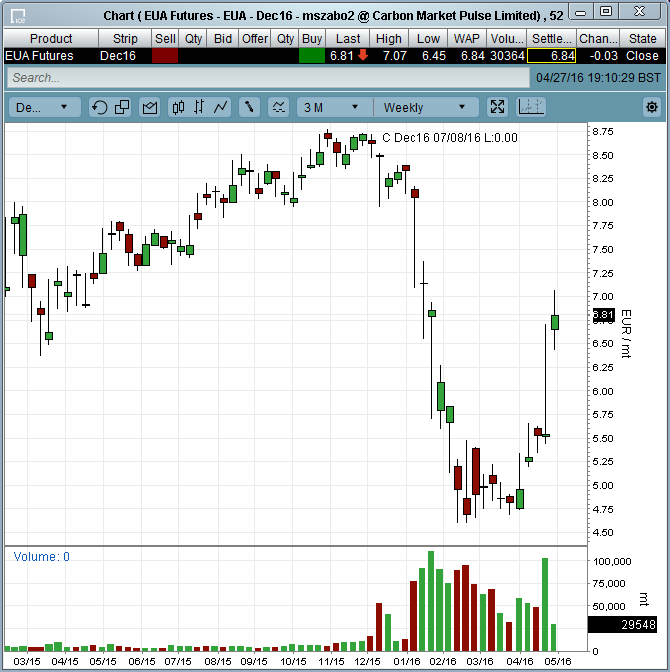